Two weeks ago, I picked up my laptop for the first time in nearly two years. The last time I’d gone to use the laptop it wouldn’t turn on. After showing it to my tech-head husband (and he reiterated that he’d told me not to buy a laptop) it seemed to be a dead duck. Bye bye laptop. Insert sad Carla face here.

Imagine my surprise when I plugged the laptop in (just for shits and giggles) and it didn’t just switch on, it actually worked.

You’ll note that this is only my second post of the year, the last being nearly 6 months ago. 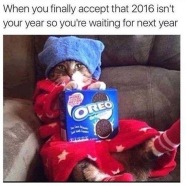 I can say without any doubt that 2016 has kicked my ass. It’s been tough. I’ve struggled at some point in pretty much every aspect of my life.

These past couple of weeks I’ve been searching for something that is just mine. I’ve never been much for hobbies. Some people run, some craft, some drink but I’ve never had a ‘thing’ that was just mine, except writing.

For about a year, I was posting regularly, sometimes as often as every week. I loved that I was able to share my thoughts and feelings as a new mummy. It was so great to have that outlet and I’ve built so many wonderful friendships because I’ve been able to share my experiences through my words and photos.

After a while though, writing for my blog felt forced. Instead of it once being a wonderful tool to harness my crazy brain and connect with others, it became an obligation, something that I felt that I had to do. Every Sunday night I would sit in our home office and push myself to get that week’s post finished so that it could be published.

I would feel such a sense of relief once it was finished and out in the world. However, that sense of relief never lasted very long. I was then wondering if anyone liked what I’d written or worrying that I had inadvertently offended anyone.

One week, Sunday evening came and went. I woke up Monday with an overwhelming sense of relief. I hadn’t written anything and it wasn’t a big deal. So I stopped blogging. I stopped journaling. I stopped writing altogether.

The once very effective outlet was gone and without intending to, I somehow slipped back into a sense of mental disarray and of feeling constantly overwhelmed. I felt like I was frantically running from fire to fire trying to put them out. However, no sooner had I put a fire out, another had sprung up elsewhere in its place.

I’m not really a huge fan of the New Years resolution (each to their own I guess) but I’ve decided that this year I am going to take a different approach.

Goodbye 2016, while it’s been undoubtedly tough, there have also been some wonderful experiences thrown in.