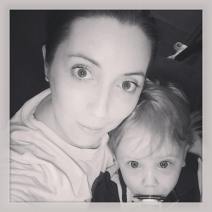 This week I dropped into the Day Care centre that Ollie will be starting at next month – when I’m back at work two days each week. We know a number of people who send their small people to this particular centre and they are all are very happy.

Only a week ago, I was patting myself on the back for being so okay with sending him to day care. I was actually surprised that I didn’t feel guilty about the entire concept. I was thinking, it will be fine, after all he has been in the care of others before and been totally fine. Others being, my parents or Aaron’s mum – however this is not often and for short periods of time.

When we attended the centre on Monday, we were given a tour of the toddler room and the facilities that are offered. I talked to the Director of the centre and she suggested that I bring Ollie in a few times to get him used to the environment and the educators. I agreed and finalised all of the arrangements for his enrolments. I managed to put on a happy face while we were there, but as soon as we were out the door I felt quite overwhelmed.

As we drove away, it finally hit me… Somebody else is going to be looking after my beautiful boy in the very near future. I felt sad, nervous, guilty, sick and uncertain. All of these emotions used to be pretty frequent visitors at the Carla anxiety party but recently, not so much. As we drove home, I tried to articulate to Aaron how I felt.

“I know that he will be okay…. I just don’t think that I will be okay… At least not for a while. I don’t want someone else to have him. I want to have him all the time. Nobody will care for him as well as I do.”

Aaron as always was (maddeningly) calm and reasonable. He told me that while nobody would look after Ollie like I could, he would be well looked after and I would get used to it eventually.

When we got home, I mentally made a Pro & Con list in my head and then eventually wrote one down. The list went a little something like this… 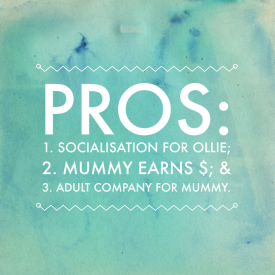 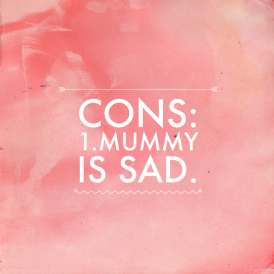 I looked at the list a few times and as it usually does, common sense won out. I am so fortunate to have been at home with our boy for the last fifteen months. I genuinely believe that him going to child care and me going back to work for those two days each week will do us both good. Of course, I still wish that I could keep Ollie home with me all the time. However, that’s just not practical for our current situation.

So, it’s time to put on my big girls pants and keep moving forward.

What are your experiences with putting your small person/people into day care for the first time?