I once heard someone say, “You repeat your mistakes until you learn a lesson.”

I have found this to be true on a number of occasions. One of the most important lessons for me was knowing when to draw a line when someone had not treated me well. For me, this was especially true in my romantic relationships.

I’ve had a couple of serious adult relationships in my time and the common factor in the conclusion of them was me being mistreated in some way. I’m not trying to play the victim card on this one at all. When I say mistreated, I’m talking cheating, manipulation and that kind of general un-fun stuff.

While in these past relationships, I allowed myself to not be treated as well as I should have been. Why did I do this? Well, I think the primary reason was that I was frightened of being alone. I was in a long-term relationship from when I was 18-23. I thought that I was going to spend my life with this person. I knew that our relationship wasn’t ideal (to say the least) but I had been with him for so long that I didn’t know how not to be with him. After that relationship ended, I was devastated. I remember thinking to myself, if the love of my life doesn’t want to be with me, why would anybody else?

Over the next 5 years, I dated a couple of people who I thought were good guys. It turns out that they weren’t really, well, not good for me anyway. I thought that had all changed when I reconnected with someone from my past. He said all the right things and we shared our past heartbreaks and future dreams with each other. It seemed that we were on the same page. Over time we talked more and more and one thing led to another and we entered into a relationship. He lived far away from me so we started making plans for visits and my future move to where he lived. I was so happy that I had finally found a kind and genuine person. Maybe I wouldn’t die alone as a crazy cat lady?

Along the way, there were little things that he said or did that sent up red flags in my mind. However, I was so happy that we were together that I pushed them aside and did my best not to think about them. He kept saying all of the right things and even though his actions didn’t exactly match his words, I continued to turn a blind eye.

Things started going downhill when after hearing a story from his best friend, I asked him a few questions. He had told me something previously and the story from his friend was the complete opposite. All of a sudden things turned sour. It was like going from day to night, the change in his personality was so drastic. He became cold, distant and taciturn. I wondered where my ‘perfect’ boyfriend had gone.

After a couple of weeks of the same cold shoulder from him, I decided it was time to end things. I tried to call him but he didn’t answer. So instead, I sent him a message asking him to call me so that we could end things once and for all. When he called me, he was like his old self again. I couldn’t help thinking that I had things wrong. He was looking forward to seeing me soon and wanted us to spend time together. After all, his work was quite stressful and he had a few family issues going on. Perhaps this had all been in my head. I agreed on the phone to give ‘us’ another chance.

As soon as the conversation ended, I felt utterly confused. What had just happened? Hadn’t my intention been to break up with him? Weird.

We had plans to meet up the next week and had booked our flights weeks in advance. As I drove to the airport, my intuition told me to turn around and go home. I ignored it. I tried to call him while waiting to board the plane and he didn’t answer. When my flight landed, I sent him a text to let him know that I was on my way to meet him at the hotel. No reply. I arrived at the hotel and tried yet again to call him. No answer.

For the next couple of hours, I sat in the lobby of the hotel, calling him intermittently. No answer. I went up to the reception desk and explained to the lady working that I was to be staying at the hotel with my boyfriend and that I couldn’t get in touch with him. I explained that he often worked night shift and had been known to sleep through a ringing phone before. She tried the phone in his room. No answer. I thanked her and went back to my seat in the lobby. Fifteen more minutes passed and she approached me hesitantly and said,

He left hours ago and hasn’t come back”.

Immediately the fog cleared and reality slapped me in the face. He had done this on purpose. He had encouraged me to fly 800km from home to see him and had never intended to be there to meet me. Ouch. I thanked the lady from reception for her honesty and asked if she had a spare room. I checked myself in and tried to figure out my next move. I have a number of friends who live in this particular city, but was too embarrassed to call them. Whose boyfriend stands them up when they’ve travelled so far to see him? Mine, that’s who.

Eventually, I texted two of my close friends and explained the situation to them. They offered to come straight to the hotel but I said that I would instead meet them the following morning. My humiliation at that point was too great. The next thing I did was ring my Mum. This probably sounds childish but I had my reasons. I did this as more of an insurance policy, for myself. I knew that if I told my mother everything that had happened, she would dislike him and there would be no coming back from that for either of us. I needed emotional back-up to be strong.

Later in the night, he did try to call me. I watched his name flash up on my phone over and over again and did nothing. I really wanted him to tell me that it had all been a terrible mistake, a total misunderstanding. However, in reality, I knew that he wouldn’t and it hadn’t been.

That night was a major turning point for me. That night, I drew a line in the sand and decided I was done. I felt heartbroken and humiliated. Again. I had what Oprah refers to as an “AHAH moment”. That was the night that I finally learnt the lesson that had been coming up time and time again.

That lesson was knowing my own worth. What was acceptable to me and what wasn’t and staying true to that. I realised that I would be better off alone then to be with a manipulative and cruel person.

My all time favourite quote is from the incredible Maya Angelou, sums this up perfectly when she said: 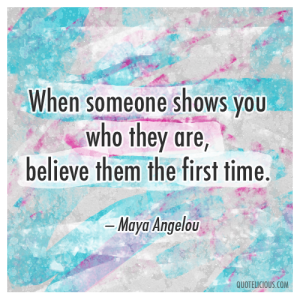